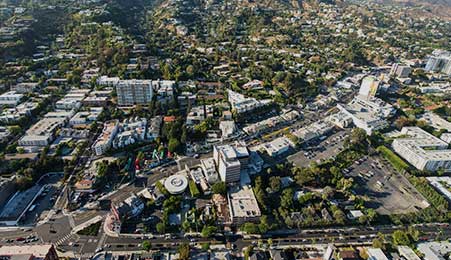 Nestled in the Los Angeles Metro Area, West Hollywood offers big city living like no other. As one of the most dynamic cities in California, it is known for its vibrant nightlife, esteemed cultural venues, and prime real estate. Spanning roughly 1.9 square miles, it is home to a population of 36,475 residents who are proud to call WeHo home. Iconic landmarks include Sunset Strip, which is lined with trendy bars and comedy clubs, and Santa Monica Boulevard, where you’ll find some of the best burger joints and steakhouses in town. Other highlights include the West Hollywood Memorial Walk, which reflects the city’s dedication to HIV/AIDS awareness, and the West Hollywood Design District, a sophisticated retail complex with high-end stores and restaurants. Real estate in West Hollywood, CA The housing market offers a fantastic selection of condos and single-family homes with Contemporary, Modern, and Mediterranean-style architecture. WeHo is divided into several residential areas, each with their own flavor and identity. These neighborhoods include Norma Triangle, a historic area named for the late silent film star, Tri-West, where nearly all major WeHo events take place, and Center City, which is synonymous with large historic apartment buildings. Other neighborhoods include Eastside, West Hollywood Heights, and West Hollywood North.